Work with us. Let’s talk about your new next project!
You are at:Home»Circular & Green Economy»WEF YGL Taskforce

Ecolab, a global leader in water, hygiene and energy technologies and services has partnered with Trucost, a global leader in valuing natural capital and quantifying the economic consequences of natural capital dependency, to develop the ‘Water Risk Monetizer’. The Monetizer is a financial modelling tool created to provide actionable information to help businesses understand water-related risks in financial terms to inform responsible decisions that enable growth.

Water scarcity is a major challenge for communities and businesses around the world, and is almost becoming the norm, with many regions facing extended periods of drought. For businesses, this poses two major threats: water scarcity limits the availability of water which may lead to decreased production and loss in revenue, and water scarcity increases the cost of water which reduces profit margins.

In 2015, the global water crisis was cited as the biggest greatest risk to business in terms of impact, with 70% of companies surveyed by Ecolab identifying water as a substantive risk to future operations. 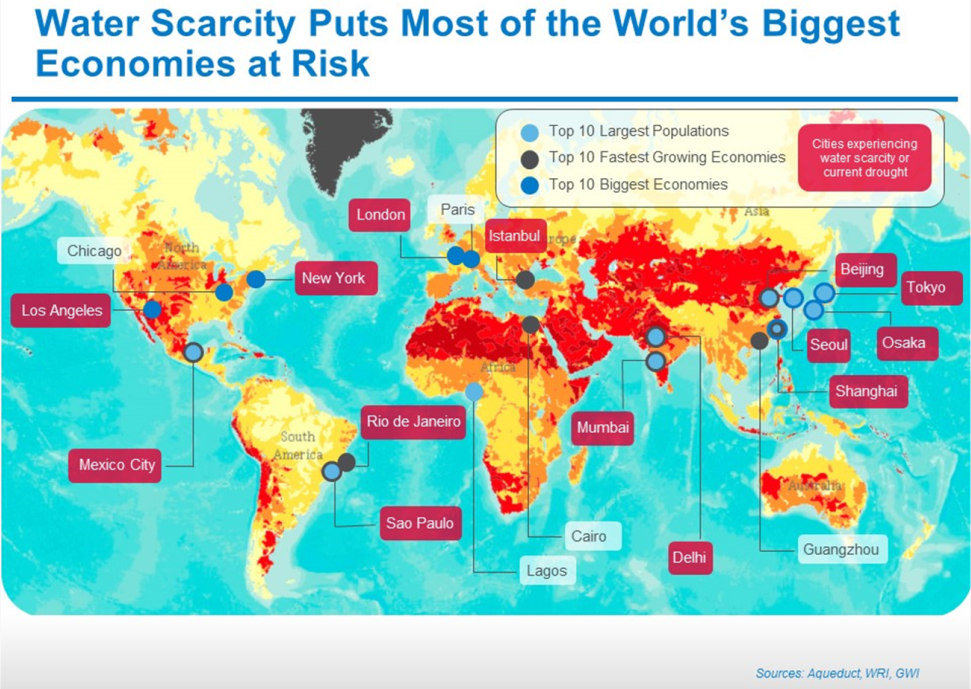 The business case for managing water scarcity is clear when you consider the following:

Through the partnership, Ecolab and Trucost identified that to turn the challenge of water scarcity into something tangible, it was necessary to translate the risk of scarcity into financial risk that could be interpreted by the business and used to inform decisions. This is the role of the water risk monetizer.

The final conclusions from the presentation were that to achieve business growth in an era of water scarcity, businesses need to change their approach to water consumption by first changing their mindset and behaviour. Emilio stressed that for a business to really succeed, it is important that they implement water management decisions before policy demands action, and to apply current technologies with short and long-term benefits.

EMG would like to thank Emilio Tenuta for an engaging and optimistic insight into the role that businesses can play in overcoming the global challenge of water scarcity.

Daan Elffers, CEO of EMG Group, is a guest member on the Circular Economy Taskforce at the World Economic Forum.

Credit to Ecolab for survey statistics and graphs presented in this blog.