Work with us. Let’s talk about your new next project!
You are at:Home»Thought Leadership»Tony Allan on Water Insecurity 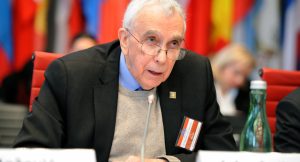 What was your primary motivation for writing The Middle East Water Question: Hydro-politics and the Global Economy?

In the mid-1960s I was fascinated by the extreme water insecurity challenges confronting Middle Eastern economies. At the time leaders and public figures in the region were predicting violent water wars as a consequence of regional water scarcity, and yet two decades later these hadn’t happened. As a scientist I needed an explanation.

In the 1980s I was working on agriculture and food production in the region and one dataset gave a clear message: Egyptian wheat imports recorded a sudden and sustained increase from 1972. International politics at the time were very complicated, but those water wars still hadn’t broken out. Here was the reason. Every tonne of wheat requires about 1000 m3 (tonnes) of water to produce. If you can import a tonne of wheat grown with water from another economy you don’t have to endure the enormous political, economic and ecosystem consequences of mobilizing local water.

Two other points also struck me. Between the 50s and mid-80s the international price of wheat and other food commodities had been falling. The wheat on the market in the 1970s was priced at about half its production cost, and this, for Middle Eastern leaders facing the elemental insecurities of food and water, was an invisible, silent, non-politicised yet very effective solution. Importing cheap food was economically and, more importantly, politically, feasible – as long as a this very effective solution remained invisible. No regional leader could admit to their people that the capacity to be food self-sufficient had been lost – they’d have been out of power the next day! The water embedded in the food had to be kept invisible. Furthermore, there was public opposition to the concept of this ‘virtual water’ trade.

What do you foresee as future challenges?

Apart from Syria, Middle Eastern economies import more than 50% of their food. The population of the region is predicted to more than double by the end of the century, while the available local natural water is likely to decline due to climate change. The 10% water demand for domestic and industrial use will be met with desalinated water, while the 90% needed for food will increasingly be met via the ‘import’ of embedded or ‘virtual water’. However the challenge is still mainly a demographic one. Two other food related societal problems in the region are obesity and diabetes. Both volume and type of food consumed are relevant to water security, and persuading consumers to change their diets is a very important and controversial policy priority.

How can water insecurity best be addressed in the Middle East?

About 90% of the water consumed by an economy is embedded in its food consumption – and most of this water is managed and consumed by farmers. They manage all the ‘green’ water – water in soil profiles that raises a crop or sustains pasture. Farmers also consume between 60% and 70% of ‘blue’ water – water flowing in rivers or stored naturally underground.

They consume water on our behalf to produce our food and we also need them to steward water ecosystem that underpin our food security. They have at the same time endured the consequences of historic drops in food prices. Other players in supply chains are beginning to recognise this sustainability issue, but they’re not addressing it because there are no regulations to capture the value of water and water ecosystems in their audited accounts. Governments are key players; politicians know they must deliver cheap food. Public subsidies do play a key role in how food is priced. Governments provide agricultural payments for farmers, energy subsidies, payments to consumers and impose beverage taxes.

Public policy will be the main, but not the only, means by which sustainable practices will be implemented. The food supply chain is firmly in the hands of the private sector, unlike the provision of water and sewage services, which is mainly in the public sector. At first sight the private sector appears to be doing well, but the apparent effectiveness of food supply chains is misleading. The absence of reporting and accounting rules means that the supply chains are actually unsustainable. Powerful corporates have immense market power, while farmers are weak having to face the volatile uncertainties of the weather and the market.

Water insecurity can also be addressed in two ways within the private sector. The accounting profession has potentially a major role to play in achieving sustainable practices in private sector food supply chains, and ethical investment could also steer corporate and consumer behaviour and accelerate the adoption of sustainable practices. See http://www.ifac.org/global-knowledge-gateway/viewpoints/complexity-and-urgency-water-time-accountancy-profession-step

Is there real innovation in the context of water insecurity?

If a nation wants to be water secure it must invest in its human resources and not just in its water infratsructures. Singapore, for example, has a population of 4.5 million, set to increase to 6 million in the next two decades. It only has water for 5% of its total water needs, and has to import almost all its food. Now it desalinates an increasing proportion of its blue water needs and has made substantial progress towards recycling 70% of the water it uses for domestic and industrial consumption. Other countries such as Jordan and Tunisia are also readdressing their policies. Personally I believe Middle East economies will continue to be dependent on the global system for food. Indeed some 150 economies worldwide are net food importers, and the proportion is increasing. It is normal to be a net-food importer.

Recycling and desalination are being adopted to mitigate water insecurity, but the cost of desalinated water will not fall to a level that will make it a major contributor to food production. As regards the circular economy and CSR in general, I think large corporates were a little affected by the concept of virtual water in the late 1990s. Arjen Hoekstra’s water footprint metrics launched in 2001 did have a major impact. His numbers threatened the reputations of the big corporates. They have invested in major research studies to keep ahead of their critics.

I do think the role of major international NGOs is significant, and the WWF is by far the main player. It works on every aspect of water and food, including investment. It has active engagement with the IFC. Greenpeace, Oxfam and WRAP are also active.

My main message is that farmers manage water, in circumstances not of their own choosing. They’re the agents of society who allocate and manage vast volumes of water on our behalf. They would be able to steward water ecosystems for us but only if they get a price for their products that gives them secure livelihoods.

Professor Tony Allan (1937-2021) specialised in the analysis of water resources problems in dry regions. His ideas on water security are set out in The Middle East water question: hydropolitics and the global economy [2001] and in a recent book on the importance of the international food trade for for economies facing water scarcity. In 2008 he was awarded the Stockholm Water Prize in recognition of his contribution to water science and water policy. In 2013 he received the Monaco Water Award of Prince Albert II of Monaco.